Historical Perspective
Ordered by the Southern Region of BR in 1957 as part of the Modernisation Scheme, and delivered from Birmingham Railway and Carriage Works (BRCW) in Smethwick from December 1959 to Hither Green, starting in traffic from January 1st 1960. The Class 33 is perhaps one of the best designs of locomotives to have come from the works of BRCW the entire Modernisation Scheme. Its length of service on the mainline network is one that is only matched by few classes of loco's currently still operating.  Designed as a mixed traffic type 3 locomotives, they had a number of unique features from the outset.

The Class 33 could be considered one of the best thought out and forward thinking locomotives to come out of the Modernisation Programme.  As the Sothern Region aimed to eliminate steam across the Kent Division with Electric Units and Electric Train Heat (ETH) stock only early on in the modernisation programme, meaning there was no requirement for a steam heat boiler on the locomotive, the space was used to fit the larger Sulzer 8LDA unit into the basic BRCW type 2 (class 26) Body shell.  With no requirement for a water tank the opportunity was taken to fit a much larger 800 gallon fuel tank.  The Southern Region also had a number of through continental ferry services where vehicles were only fitted with ETH supply and airbrakes.  So the 33’s were fitted with dual (Air/Vacuum) train brakes and ETH from the production line, rather than retro-fitted as per other classes. Some early examples were fitted with a through steam pipe, but this was soon abandoned and removed.

The locomotive was built with driving controls on both sides of the cab, gauges were however not repeated, and the last 12 were built to a slimmer profile of the Hastings loading Gauge, these became known as ‘Slim Jims’, brining construction of the 98 units to a close, BRCW not surviving much longer after production ceased in 1962.
Although solely allocated to the Southern Region Depots throughout their BR careers, and usually heavy work usually at Eastleigh Works, it didn’t stop the roaming across the Network.   Train Crews at Worcester were trained on them, as they were used on oil services from Fawley.  They regularly visitors to Tyelsey, whilst working on a Southampton to Crewe freight service.  Derby played host to one during 1964 to allow testing of the air brakes on the first container flats. Probably one of the most iconic workings was the Cliffe-Uddingston cement trains, which they worked as far as York. With York and Finsbury Park drivers trained on the type, The Eastern Region, didn’t allow them to sit idle for long and they would be used on a fill in turn to Hull and back, before heading back south.
1965 saw the arrival of D6580 the first ‘Bagpipe’ 33, later to become 33/1 and the only 33/1 to ever carry green livery. After trials 19 others were randomly selected from the fleet and converted at Eastleigh Works with a central buffing plate over the draw hook with waist height air pipes and 27 pin Connector cables.  This meant they could control the Electro Pneumatic (EP) controls of SR Mark designed Emu’s and Trailers, but also the class 73 and 74 locomotives.  With third rail electrification to extended to Bournemouth, onward workings to Weymouth changed with the introduction of motor-less trailer coaches (TC) units.  These were detached from the EMU and taken onwards to Weymouth by the 33.  These were worked as a push-pull services and showed the versatility of these locomotives and the operation of the railway. Occasionally they would appear Cross London Freights, and this would see them appear at various yards in the London area.​

During the 1970’ and 1980’s they spread their wings to the West of England, and Wales on regular passenger services, the South Coastal services from Brighton/Portsmouth to Cardiff and beyond.   Eventually taking over from Class 25’s on the Crewe-Cardiff Welsh Marches services.  In time these services would be extending to Holyhead, Liverpool and Manchester Piccadilly.  With the completion of the Electrification to Weymouth, and the introduction of the Wessex Electric Units, on top of the mass ‘Sprinterisation’, the days of Class 33’s on regular passenger diagrams almost ended overnight.   During the 1990’s they were seen as surplus to the requirements of the privatised railways and succumbed steadily to withdrawal as newer Class 60 fleets allowed for a cascade of other classes into some of their roles.  The arrival of the Class 66 and 67 should have been their death knell, but it wasn’t.  A select few were taken into stock by Direct Rail Services (DRS) for Mini-Modal work, but were soon deemed surplus to requirements, as DRS invested in other forms of traction.   These would later pass to West Coast Rail (WCR), which has seen them become regular performers in Scotland, often out-stationed to Fort William.  The class is truly well travelled across the network and is still providing good service for many a heritage railway and mainline operated alike.  Love them or hate them, the ‘Crompton’s’ Or ‘Shredders’ or have certainly made in impact throughout their 60+ year career.
What’s in the Box?

The loco comes well packaged in the later Heljan grey foam packaging attached to a wooden plank and secured via screws. Inserted into the foam is a packet of accessories/additional items, including snow ploughs and the class characteristic bogie side exhaust pipes.  There is also the usual information sheet with parts numbers and other information.
The Model
Heljan have done a good job of the one piece finely detailed body moulding, including the recessed air horns pocket and cab vents, roof hatches, sectional fastenings and moulded lifting points. The Cooling fan grill and cant rail grills are finely represented and crisp due to them being etched additions to the plastic body.  The issues from the original batch with the roof moulding lines seem to have been addressed.   Factory fitted air horns and NRN antenna are also present.  Separately fitted plastic handrails are standard across the range. 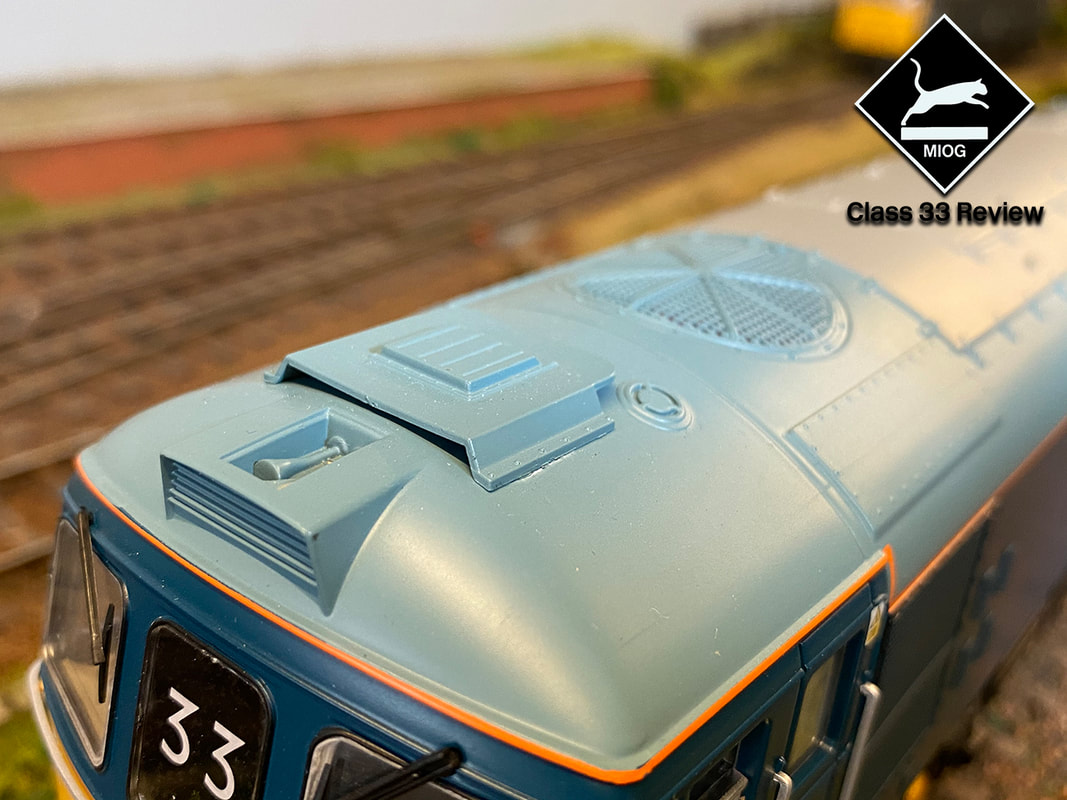 The cab interiors look good with the correct representation of control desk.  With replicated drivers’ controls on the second man’s side.  It will look even better with a crew added on the seats. But here comes a personal sticking point, I’m not sure why Heljan have opted to model the loco with driver’s side window half open.

​The roof on the models I received for review is of the later type. With the exhaust port opening above the turbocharger part away along the engine room roof.  Rather as built with a silencer box and exhaust port on the opposite side closer to number 2 end.  The livery for as released models is in the line-up, but whether a retooling of the roof for the Silencer box, has been undertaken I have yet to find out. I’m aware that the recent 4mm release has the silencer box fitted on the early examples.

The body side detail is good, with separately applied handrails.  The application of the colours is accurate and standard of the transfers the DRS model is excellent.  The Dutch model had no transfers added and was a complete blank canvass apart from some electrification flashes to the cab front. As this is a pre-production sample I could see some areas that would be needed to be tidied up before going into mass production.

The level of detail below the body is as good as the rest of the body.  The mouldings catch the bogies well, with clearly moulded bogie frames including: primary, secondary coiled springs, sandboxes and brake actuation gear. Also modelled is the speedo cable giving the bogies a level of detail that well replicates the original prototype.  The battery box, air tank and fuel tanks are well modelled, with the orange electrical ducting picked out. 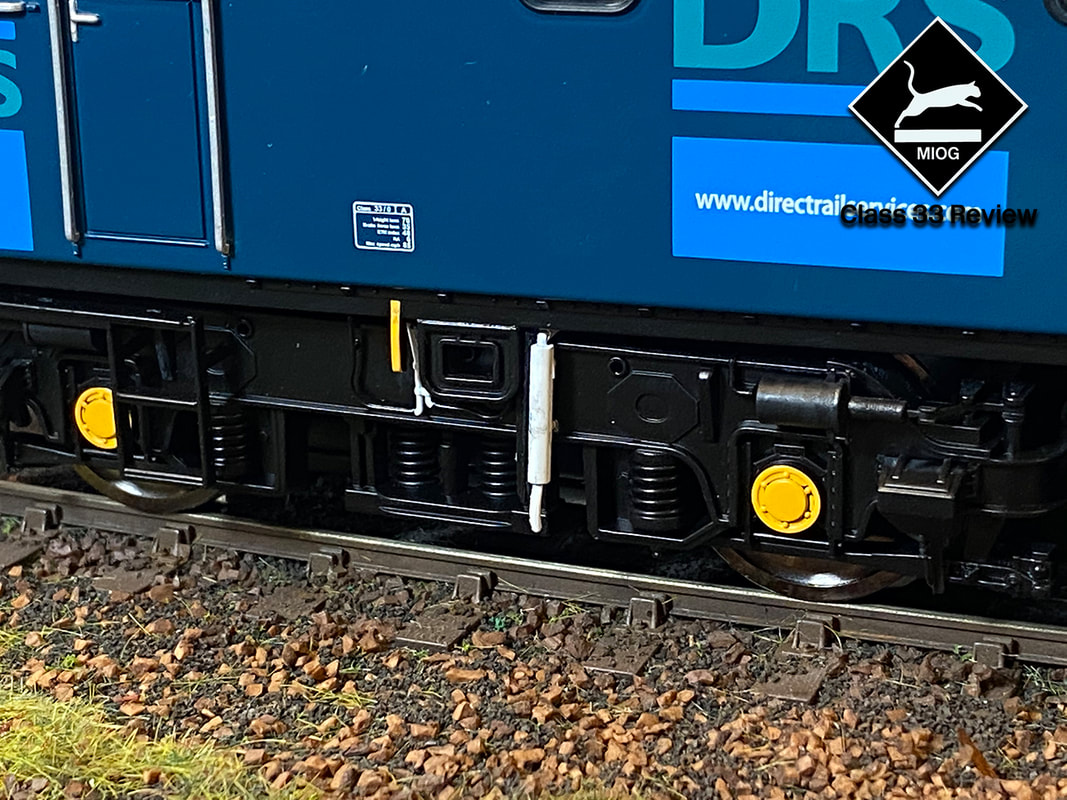 From the front the loco looks in good proportions with extra lamp irons and the High Intensity Headlamp is represented well.  The separately fitted windscreen wipers are well moulded.    The Dutch 33 left the route blinds empty capable of showing red tail panels, whilst the DRS one has 33 displayed.  The buffer beams are of a high standard with Vacuum, air brake pipes, engine air control pipes, multiple-working jumpers, ETH cables and sockets modelled.  There are moulded plates either side of the draw hook are modelled as per prototype.  A screw link shackle is fitted as standard to the draw hook, as well as a good representation of the Oleo buffers complete the view from the front.

This brings me onto sound fitting the model.  Heljan have responded to the concerns over the length of the internal lighting and control wires, and these have been extended and certainly on the DRS model, they are colour coded.  There are a variety of sound fitting options available from both Suppliers and manufacturers, giving you options to enhance your model.  But if you’re modelling the loco as built, with a silencer box, the sounds will be different and I’m not sure if anyone actually has copies of this sound.  Maybe a preservation group, might invest in reattaching the exhaust silencer which was still existent in at least one of the preserved examples some years ago.

Now for the big question?

​The small cab front marker lights.  As supplied from Heljan and running on DC/Analogue control, they do work and they are red which is correct as they were delivered.   In traffic, the blinds were often wound to the red panels in the centre head code, certainly on the Push Pull Services, but also light engine movements. You will find images that have them carrying tail lamps, especially the West Coast Railways examples, as the marker lights were removed.   If you’re choosing to model these, you will need to do some work on the nose ends to remove the apertures in order to model this variety accurately. There are some examples seem to be fitted with white lights in these apertures and a couple of examples spring to mind including 33012/D6515 as it is currently running mainline.
Liveries
The Class has worn a number of colours over the years, Heljan are releasing a number of colour schemes. A full comprehensive list of available liveries is below;

The RRP for these models is £549.99 The two liveries we had for review were HJ3401 & HJ3404 although we must stress that the Dutch 33 was a pre production model and doesn't depict the finished model. 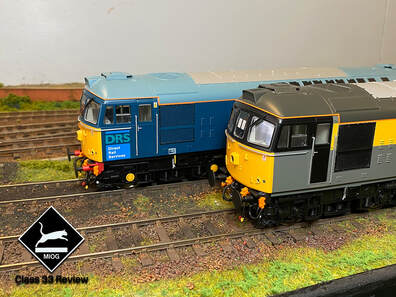 Ready to Run 0 gauge models have come a long way over recent years, but models of the class 33’s have come further than most, especially when you consider the previous Lima offering.  The latest incarnations of Heljan’s 33 certainly seem to iron out some of the previous criticisms of the earlier release of the model.  Would I get one?  It’s an excellent model and given the choice of liveries available would fit well across many eras and regions.  Given that they can be obtained close to £470 from a major retailer, they offer excellent value for money, but then the question is which one do you choose?
Please remember to do your research on that locomotive that you wish to model, as there are some nuances to individual locomotives that aren’t covered in this review.