I have two early build Bauxite (pre TOPS) single vacuum cylinder version for review that will be used on my layout Clemesha Quay. 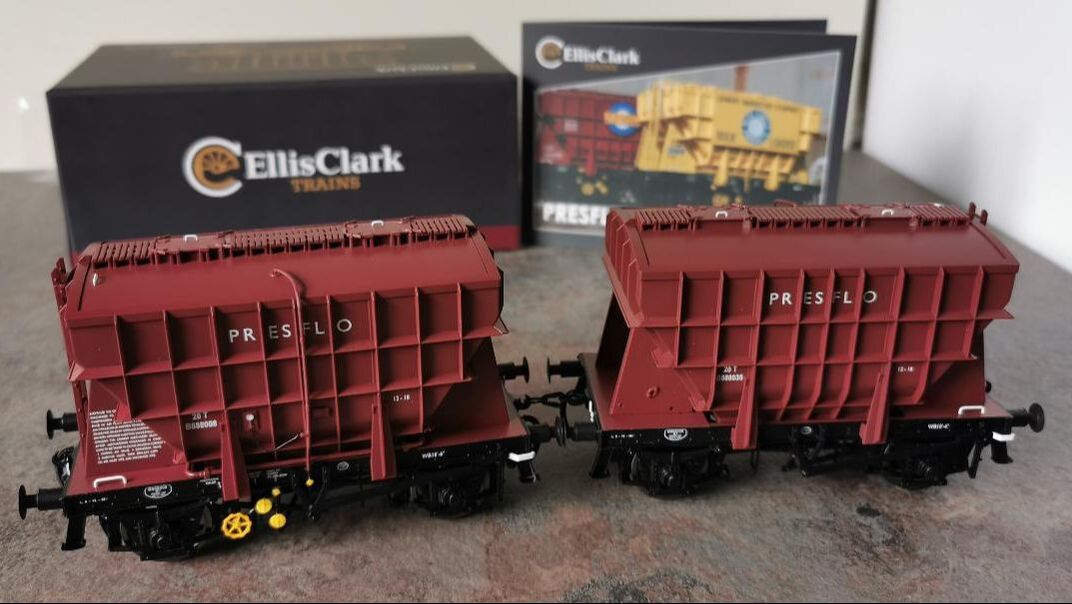 A Brief History.
The prototype vehicle emerged from BR Shildon works in 1954 and was quickly followed by the first few batches. The wagons were designed to carry 20 tons of fine powder goods, such as cement, salt, clay and sand. They were one of the first vehicles to be built by British Railways that didn’t follow a pre-nationalisation design. They were equipped with vacuum brakes and rode on a 10ft 6in wheel base equipped with roller bearing axles from new.

They were loaded by gravity through the roof hatches, and discharge was untaken by using compressed air at 20psi. This was blown into the hopper box to make the load more ‘fluid’ and less clumpy. The method is referred to as Pressure Flow, and this is where the name Presflo came from. The characteristic ribbed design, is reinforcing of the hopper box and is to reduce the chance of it collapsing in on itself during the unloading process.

​From the Mid 1960’s vehicles were trialled to carry Pulverised Fly Ash (PFA), which is basically the remnant ash from coal burning power stations. The load for these was reduced to 17t for these wagons due to the lightness of PFA and the inability to pack anymore into the hopper box.

With over 1500 vehicles built to the original designs the Presflo’s could be seen the length and breadth of the country as well as on the continent. A number were fitted with Air pipes and Ferry lashing hoops on the solebar to allow them to travel via channel ferry to Italy taking with them a cargo of Fullers Earth.  This ceased in 1972 as the vehicles were considered non-compliant. They could be found both in full rakes such as the block cement trains and as individual vehicles in mixed freight rakes.

Allied Portland Cement Manufacturers (Blue Circle) had 200 vehicles in its fleet.  100 of which were built in Butterley, which generally carried the Yellow livery of the company. Many carried large side boards for advertising their owners, and others carried smaller boards.

​​Although under the Presflow banner there are two exceptions that are not covered by the ECT model.

A number were built by Metro-Cammell to the design for carrying salt for ICI. These were fitted with double silos and two hoppers, extra top walkways and supplementary pipework. These went on to be used for slate waste from Cornwall and then later PFA or cement.

In 1964 a further 3 batches of Presflo were built specifically for PFA traffic although to similar design they sat on 12ft 6in wheelbase chassis. 2 batches with air brakes and one with vacuum brakes were built to allow the loading capacity back to brought back 20 ton capacity of PFA.

With the advent of TOPS codes the privately owned wagons acquired the CPV designation, whereas those owned by BR were coded PCV they remained in service until the Mid 1980’s. with the larger versions being withdrawn in 1987. 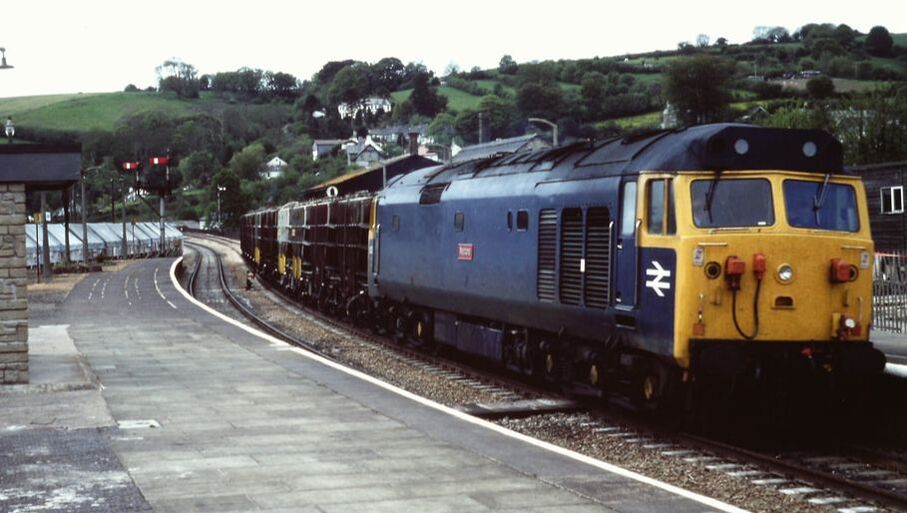 50006 "Neptune" Lostwithiel 18/05/82 with an Up Cement. Image courtesy of Alan Tait.
Whether carrying slate waste from Delabole Quarry in Cornwall or Alumina across Scotland, Presflo’s are mainly associated with carrying cement to various destinations around the country for use in major construction projects. One location near the Kyle of Lochalsh received the Presflo wagon attached to the back of passenger working during the 1970’s.
https://windcutter.wordpress.com/2012/01/08/the-kyle-mixed-and-xp-brandings/

The Presflo has been the subject of many incarnations in most scales, both as kits and ready to run models and certainly as a young boy I made a few of the Airfix incarnations. In 7mm scale until there has only been kit built versions until now.
What’s in the box
The model is held well in the foam insert, but not too tightly you have to use excessive force to remove it. There were no errant bits floating round in the box which is a positive.
Hands on review
​The model weighs 185g or 6.5 ounces in old money, and the blackened wheels run free and should ensure that a lengthy train doesn’t put too much strain on the loco. The Hopper body is made from finely injected moulded plastic with fine and crisp rib detail representing the prototype well. The roof mounted loading hatches are finely moulded with handles and latches all present.  Between the hatches is a finely moulded central walkway. There is a small white grab handle on the hopper roof positioned at the top of the finely moulded ladder.
The model has crisp and clear lettering and number transfers, operator unloading instructions are clear and legible. There is a pressure gauge mounted on the body with a finely moulded air pipe.
The chassis is finely moulded diecast with plastic additions with a good level of detail in the leaf springs. The brake gear is modelled to a high standard while the axles move freely up and down in the horn guides and run freely with enough resistance to hold position on a layout without careering off at the slightest shove.

Turning the model over, the unloading pipe work is modelled and the ribs of the bottom hopper are clearly moulded. The buffer beam carries an instanter 3 link coupling and a vacuum hose with a lamp bracket added at both ends, whilst at one end is the exit pipe for unloading equipment. Buffer housings are nicely moulded, and a sprung metal buffer head is inserted. There are two types of buffers on the ECT models as there are with the prototypes.
Conclusion
In my opinion ECT have set a very high standard for their first goods wagon and if you model any period post 1951 to the mid 1980’s there should be a home for at least one of these wagons in your collection. Dare I say they would equally at home behind steam locos as they would be behind a diesel of almost every class until the Class 56 was introduced. Yes, you will find images of class 56 and 58’s hauling Presflos, but these are the longer 12ft 6in wheel base air braked version, not those as modelled by ECT on the shorter 10ft 6in frames.

The build quality is excellent and there were no unintended bits in the bottom of the box, the level of detail is exceedingly high for the price. At a shade under £70 for a single model and a discount for purchasing over 5 vehicles they certainly represent excellent value for money. My only criticism is the bag of extra bits in the box, there’s no instructions or diagrams on where to put these.