Please see all details of layouts, traders, prices and how to find our venue below

A Massive Thank you from the Modern Image O Gauge
Group to everyone that came and supported our exhibition in 2019.

Please check back for more details on next years event in due course!
​

The exhibition will take place at ;-

The Postcode for sat-navs is - BB4 8HW

Parking is available free of charge at the venue, but is limited.

The map below shows the exact location of the show;

Have no fear if you are travelling a long way for the exhibition we've prepared an intensive menu of food and snacks to keep you going throughout the day when you arrive! We will be having a Menu for each day of the exhibition. These are view able below! 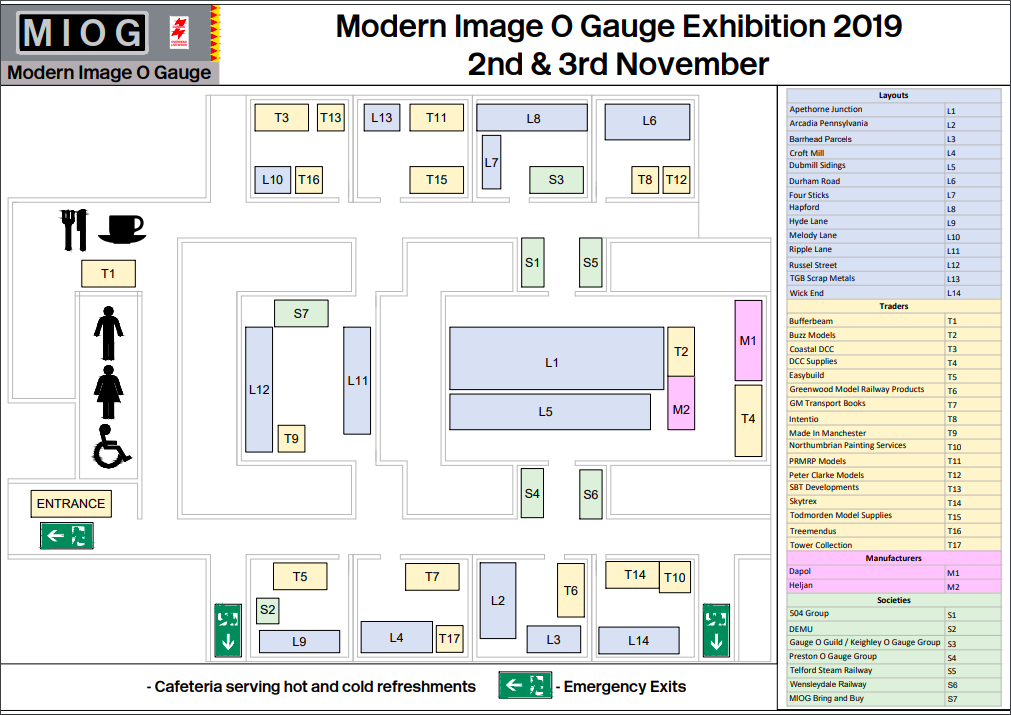 This layout depicts a fictional non-passenger part of the railway system somewhere in the North Western corner of Cumbria. The chosen era is 1967 to 1970 – green and blue diesels, grey, brown, blue and white freight stock and maroon and corporate blue parcels stock – all very colourful.

Hyde Lane takes its inspiration from the Healey Mills shed and is developed from inspiration taken from various yards/depots around the country. The main building on the layout is that of the locomotive shed, as mentioned before it is based on the diesel shed at Healey Mills, but shortened to house one loco length instead of two. The sanding hoppers are based on those at the old Finsbury Park depot although I understand them to be of a standard design on the Eastern Region. The fuelling point is based on that at Tinsley with other influences also incorporated. A Variety of traction can be seen on the layout which adds for a variety of scenes to be created.
Apethorne Junction, 1970's

Apethorne Junction represents a fictional double junction station in North West England. The layout takes its inspiration from books such as those from Foxline, which cover the East Lancs/Greater Manchester region at the beginning of the diesel Era The period in which the layout is set is from the late 1960's of British Railways, where green diesels have taken over from Steam, into the post-TOPS era of late 1970's British Rail Blue. Featuring a wide variety of classes and DMU's. The layout is DCC and features sound, colour light signalling, point-work and uses computer control to control the route setting on the layout.
​
All images courtesy of BRM
Croft Mill - 1970's

Wick End is based on a fictitious branch of the Highland Railway from Wick via Nybster to John o’Groats. The truth has been bent slightly and the main ferry service for the Orkney Isles operates from here allowing for a steady stream of subsidized rail services and freight traffic, although we portray this as ‘being on its last legs’ in the era we model. Set in the late 1980s we use mainly ready to run stock that has been alterd, repainted and sound chipped. This layout has featured in the 'Hornby Magazine'

All images courtesy of HM
TGB Scrap Metals, Late 1980's
​
TGB metal recyclers and block paving specialists. are a freelance independent itinerant father and son outfit trading in Fulchester around 1989. A snapshot of their day to day lives is captured as they queue up for the weigh bridge to trade their scrap for cash at this docksideterminal based on a current operation at Barry in the vale of Glamorgan. This 7mm modern image diorama is used to showcase scratch built resin cast wagons built by the owner​
​Ripple Lane, 1990's

​Ripple Road (Lane) is based on the real track plan and shed of the East London Depot. It was an outpost of Stratford and was built to serve the deep water Port of Tilbury and the Shell Haven Oil Refinery at Stanford-le-Hope. The layout is set in the late 80’ and early 90’s but the location has been moved to the North of England and is a servicing shed with loco’s visiting from all points of the UK. BR blue is being fazed out in favour of triple grey but can still be seen from time to time. Stock is mainly from Heljan with a few kit builds.
Russel Street, 1990's​

Russel Street started out as a first venture into the 7mm scene, with very little knowledge of the scale started in around 2016. The layout is based in the Scottish region, which allows for a vast amount of rolling-stock to appear on it. The layout features a small station, based somewhat on Fort William, and also a massive feature of the layout is a warehouse which has been completely scratch built but allows the layout to have a heavy freight element within. As loading/unloading of trains can commence from the two road shed. All the Stock is heavily modified Ready to Run stock, which has also been fitted with sound chips and repainted. This will be the layouts first official Exhibition, although it has made a couple of public appearances before that at preserved Railways.
Durham Road, 1990's

Eaton Lane is a modern image, light repairs and refuling depot set in the mid to late 2000's. Used and owned by Network Rail and sees regular activity from locos being used on test trains. The local TOC's also occasionally use the facilities if they are caught short and locos or stock need repairs and can't quite make it to their home depot.

​Photos for this layout will be added in due course.

​​Layout description to be added soon.

Arcadia Pennsylvania is a front (and rear) operated, freelance, box-theatre style “time-saver” layout depicting a fictitious, small industrial railroad freight terminal set in Arcadia, Pennsylvania, Eastern USA; the freight terminal has, as part of its backcloth, the declining “Arcadia Steelworks” Blast Furnace, although they are not operationally related.

Rolling stock and architecture represents the period 1960’s to 1970’s and a short line (APT) serves the location – to handle box cars, flat wagons, gondolas, and tank cars for several local operations. Sometimes, the route is worked by other motive power and, as a result, stock can be seen to be worked by a Pennsylvania RR Alco RS-1, a Louisville &amp; Nashville EMD SDP35. The freight yard’s resident locomotive is a leased Central Railroad of New Jersey EMD SW9 (to be branded APT). Freight traffic is generated using a 4-track traverser that is linked via a short tunnel into the freight servicing area. Points are controlled remotely, using Tortoise slow-
action motors.
Please note that all layouts are subject to availability & change.

Our finalised list of traders to be attending the exhibition

Please note that all traders are subject to availability & change.

Our finalised list of manufactures to be attending the exhibition;

​- Dapol
- Heljan
Our finalised list of societies to be attending the exhibition;